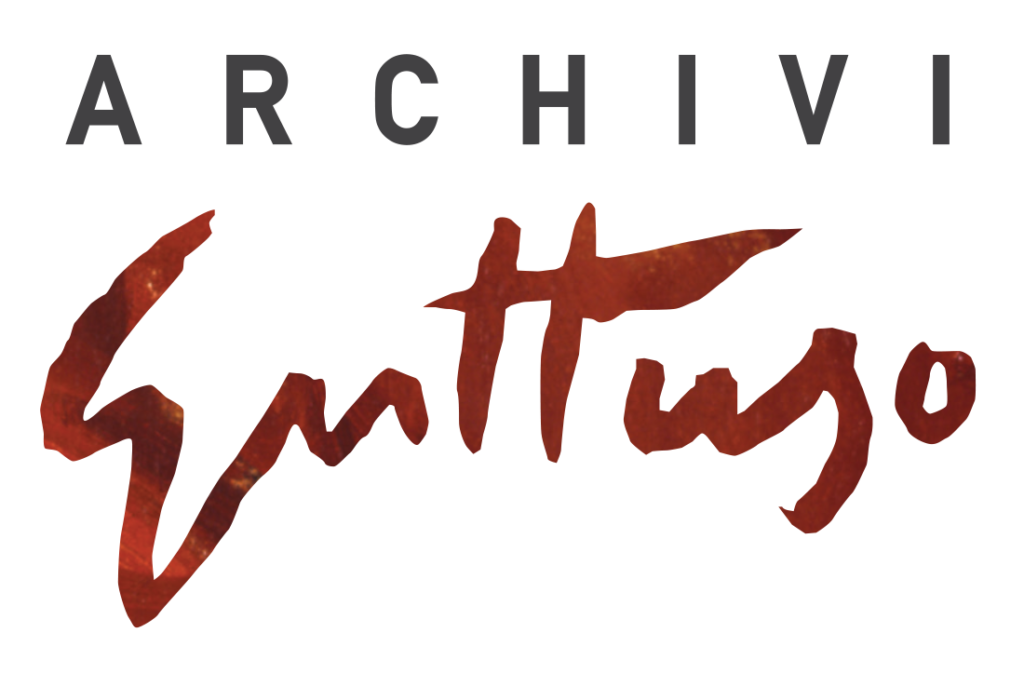 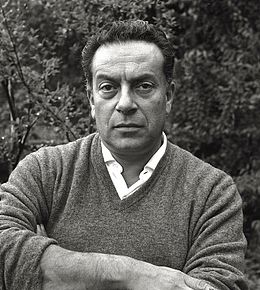 Renato Guttuso was born on 26 December 1911 at Bagheria. His father Gioacchino, a land-surveyor and amateur watercolourist, and his mother Giuseppina d’Amico, due to disagreements with their own town depending on their liberal ideas, registered the birth on 2 January 1912 in Palermo. In his birthplace Guttuso discovered painting at a very early age; as he himself wrote: “… among my father’s watercolours, the studio of the painter Domenico Quattrociocchi and the workshop of the cart painter Emilio Murdolo my path was taking shape when I was six, seven, ten years old…”.

1924 – 30
In 1924, when Guttuso was only thirteen, Guttuso, 1930he began signing and dating his work, mainly copies of 19th century Sicilian landscapes painted on wood. Among them one can mention Gulf of Palermo (1925), in which the grain of the wood is used to represent the sea waves. He also followed other models: French painters, as in Millet’s Angelus (1926), painted on a palette maintaining its original shape, or contemporary ones whose illustrations he somehow succeeded in getting hold of, as in Maritime pine (1929) after Carrà. In this period he also painted portraits like Graziella, Portrait of his father, Sir Gioacchino Guttuso Fasulo (1930). In the following years he frequented the studio of the futurist painter Pippo Rizzo and the artistic milieu in Palermo.

1931 – 33
In 1931 the acceptance of two paintings by the Prima Quadriennale d’Arte Nazionale in Rome offered him the opportunity to see the works of the greatest Italian artists. In 1932, an exhibition by Guttuso and five other Sicilian artists at the Galleria del Milione, Milan, aroused great interest in the Milanese artistic milieu. To earn his living, Guttuso was employed as a picture restorer by the Picture Gallery in Perugia and by the Borghese Gallery in Rome. In this period he came into contact with artists like Mario Mafai, FrancescoTrombadori, Corrado Cagli, Pericle Fazzini, Mirko and Afro. In 1929 he began contributing to newspapers and periodicals, and the topics of these early articles showed clearly his position in favour of a committed painting. In 1933 his first article on Picasso ran into the Fascist censorship and caused the suspension of his contribution to the Palermo newspaper L’ora.

1934 – 36
The Galleria del Milione, Milan, holds a second exhibition by Guttuso and other Guttuso, 1935Sicilian artists with whom he had formed the Group of Four (the sculptors Giovanni Barbera and Nino Franchina and the painter Lia Pasqualino Noto) in a reaction against the dominant ‘Novecento’ movement. The exhibition was reviewed by Carlo Carrà, at that time the most authoritative painter living in Italy. In 1935 Guttuso did his military service in Milan where he made friends with artists such as Birolli, Sassu, Manzù, Fontana, with whom he shared a studio, intellectuals such as Raffaele de Grada, Elio Vittorini, Raffaele Carrieri, Edoardo Persico, the poet Salvatore Quasimodo and the philosopher Antonio Banfi. Despite these friendships, which were of primary importance for the political and cultural experience of the group ‘Corrente’, the Milan period was marked by depression and severe economic hardship, reflected in the tone of his poems of the period.

1937 – 39
These years were among the most important in Guttuso’s life. He settled permanently in Rome and his studios, the first of which was in Piazza Melozzo da Forlì, appeared in his paintings and became stimulating centres of the cultural milieu in Rome. In that period he made friends with Alberto Moravia, Antonello Trombadori and Mario Alicata, who played a decisive role in his decision to join the Communist Party. His first one-man exhibition in Rome was presented by the writer Nino Savarese. These are the years of the outstanding still lifes and of large works such as Fucilazione in campagna (Execution in the country) dedicated to Garcia Lorca, and Fuga dall’Etna (Flight from Etna) which won the Bergamo award in 1938, at that time the most respected artistic prize in Italy. In the same year he met Mimise Dotti who became his life-long companion. He contributed as art critic to Le Arti, Primato and Il Selvaggio, the periodical directed by Mino Maccari which devoted an issue to his drawings (1939).

1940 – 44
Guttuso kept producing outstanding works: nudes, landscapes, still lifes as well as a large-scale composition, the Crocifissione (Crucifixion) (1940-41), his most famous painting and one of the most relevant masterpieces of the Twentieth Century. He himself explained the meaning of the work: “… this is a time of war. I wish to paint the torment of Christ as a contemporary scene … as a symbol of all those who, because of their ideas, endure outrage, imprisonment and torment”. This painting, that was awarded the second prize at the Premio Bergamo in the Autumn of 1942, provoked widespread controversy to the extent that the Vatican forbad the religious to look at the canvas. In 1940, Renato Guttuso made his debut as musical scene designer, creating scenery and costumes for Histoire du Soldat at the Teatro delle Arti in Rome, directed by Anton Giulio Bragaglia. In 1943 he left Rome for political reasons and join the Resistance against Fascism. The series of drawings entitled Gott Mit Uns, realized with inks of underground printing-houses, bears a tormenting witness to this period of partisan war.

1945 – 50
Guttuso met Picasso in Paris and their friendship lasted until Picasso’s death. With artists such as Birolli, Vedova, Marchiori, and the art dealer Cairola Guttuso founded the “Fronte Nuovo delle Arti’ (New Arts Front), a group of politically aware artists who aimed at making up for those European artistic experiences whose circulation in Italy had been prevented by Fascism. Social themes and scenes of everyday life prevailed in his painting: pickmen of the Aspra quarries, sulphur miners, seamstresses, peasants claiming uncultivated lands. In 1947 Guttuso moved to a new studio in the Villa Massimo. In the same year he prepared scenery and costumes for the first Italian performance of Sostakovic’s Lady Macbeth in Venice, initiating a long collaboration with the choreographer Aurele Millos.

1950 – 56
In 1950 Guttuso was awarded the World Council of Peace prize in Warsaw, and in the same year his first one-man exhibition was held in London. In 1952 he designed scenery and costumes for the Italian première of Mother Courage by Bertoldt Brecht, performed at the Teatro dei Satiri in Rome. Large-scale paintings of his were regularly shown in the Venice Biennale, always stimulating debates and controversies: in 1952 Battle of Ponte Ammiraglio, in 1954 Boogie Woogie, in 1956 The Beach. In … Guttuso married Mimise; Neruda, who had dedicated a heartfelt poem to his painting, was a witness at their wedding.

1957 – 65
Guttuso was especially active as an art critic, contributing articles on the theory of art, and particularly on realism, for important Italian and international magazines. He painted Guttuso, 1958The Discussion, later bought by the Tate Gallery, London. He also made illustrations for The Divine Comedy, published by Mondadori in 1961. Elio Vittorini wrote an influential monograph on his painting and Pier Paolo Pasolini, a good friend of his, provided an introduction to a book of Guttuso’s drawings. These were very successful years sanctioned by major international exhibitions which included those at the Aca-Heller Gallery, New York in 1958, at the Pushkin Museum, Moscow, in 1961; and a large retrospective at the Stedelijk Museum, Amsterdam, in 1962, later moved to the Palais de Beaux Arts, Charleroi. In 1963, a large anthological exhibition, presented by Roberto Longhi, was held in Parma. That year, also in Parma, Guttuso designed scenery and costumes for Verdi’s Macbeth. Guttuso began working on the theme of the newsstand and the man reading a newspaper, which led to his only major sculpture.

1965 – 71
In 1965 Guttuso moved to the Palazzo del Grillo, Rome, where he lived and worked until his death. The following year he realised Autobiografia, a large cycle of paintings which formed the nucleus of an exhibition which travelled to many European museums. The cycle was analyzed in an important monograph by Werner Haftmann. One of the most noteworthy paintings was Gioacchino Guttuso Land-surveyor (1966), a tribute to his father portrayed on the grass behind his theodolite.
Guttuso worked on scenery for Il contratto by his friend Eduardo De Filippo.
In 1971 he was awarded the degree of Doctor honoris causa by the University of Palermo.
In the same year major retrospectives took place at the Palazzo dei Normanni, Palermo, with catalogue introductions by Leonardo Sciascia and Franco Grasso, and at the Musée d’Art Moderne de la Ville de Paris.

1972 – 80
Guttuso was awarded the Lenin Prize at the time of his exhibition at the Art Academy in Moscow, 1972.Guttuso mentre dipinge i funerali di Togliatti The same year a large retrospective toured Eastern Europe calling at Praha, Bucarest, Bratislava and Budapest. Two major paintings belong to this period: La Vucciria (1974), later presented by the artist to the University of Palermo, and Caffe Greco (1976), now in the Ludwig Collection, Cologne. Guttuso illustrated Verga’s Malavoglia, 1978 and Virgil’s Aeneid, 1980. In 1976 he was elected a Senator of the Republic for the Italian Communist Party in the constituency of Sciacca. In 1973 Guttuso selected a relevant collection of works, both his own and by other artists, which would form the core of the future municipal art gallery of Bagheria.

1981- 87
Guttuso completed one important cycle of paintings, Le Allegorie (The Allegories), which, together with Malinconia nuova (New Melancholy) and La visita della sera (The Evening Visit), were shown in Rome with an introduction by Giuliano Briganti.
In 1982, the cultural centre of Palazzo Grassi, Venice, organised an important exhibition introducted by Maurizio Calvesi, Cesare Brandi and Vittorio Rubiu.
In 1983, he painted a mural, Fuga in Egitto (The Flight into Egypt), for one of the chapels of Sacro Monte (above Varese).
At the end of 1984, the first three volumes of the catalogue raisonné compiled by Enrico Crispolti were published by Mondadori.

Guttuso died on 18 January 1987, leaving major works to the Galleria d’Arte Moderna, Rome. He had previously entrusted other works together with a rich collection of documents to the Museum his native town of Bagheria had dedicated him. So the Museo Guttuso, housed in the 18th century Villa Cattolica, owns the largest collection of his paintings, drawings and graphics. A large funerary monument by Giacomo Manzù, a close friend of the artist’s, stands in the grounds. In 1987, a few months after Guttuso’s death, a memorial exhibition was held in Bagheria; the exhibition, entitled “From the beginning to Gott mit uns”, was organized by Maurizio Calvesi with contributions of all the most important Italian art historians. After his death, his adopted son, Fabio Carapezza Guttuso, established the “Archivi Guttuso” in the artist’s former studio in the Palazzo del Grillo. In recent years the Archivi Guttuso have carried out the following activities: two major retrospectives, the first in Germany in 1991 and the second in London and Ferrara in 1996; the completion of the catalogue raisonné of Guttuso’s paintings, realized in collaboration with Enrico Crispolti; a great exhibition on the theme of Guttuso and Opera, held at the Teatro Massimo, Palermo, on the tenth anniversary of his death; research work and editing of a monograph on the painter published by Rizzoli in 1999.